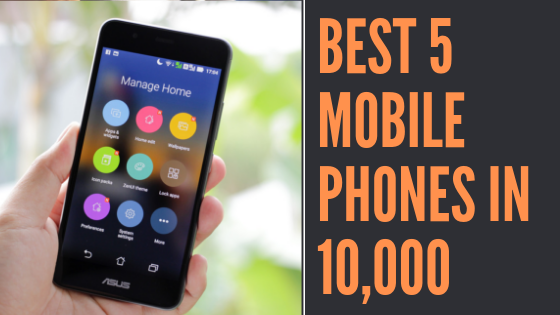 When you are planning to buy the best Android or smartphone, the first thing that you definitely ponder over is the price. The features of the phone come later in the consideration list. And if the price is too high, you usually back out. Finding an appropriate phone under ten thousand rupees seems to be one of the hardest task owing to the very fact that today, mobile phones are loaded with enhanced micro components and features which do cost a fortune.

This is why today we are presenting the best five mobile phones within the price range of ten thousand rupees!

This Android smartphone has a display screen of 5.2 inches with an enhanced pixel resolution of 1080×1920 pixels. The PPI rating of the display screen is 424 pixels per inch of the screen. The phone has an octa-core processor with a clock operating frequency of 2.5GHz. The RAM has a memory of 3GB with a 32GB internal memory capacity. The expandable memory capacity of Lenovo K8 plus is 128 GB. A 13Mp primary and 5Mp secondary camera are present on the rear with auto-focus feature while the front camera is of 8Mp.

This phone sounds to be the best if you are a photogenic person, especially because it has two different cameras on the back with the resolution of 13 MP and 2 MP respectively. A front camera of 8 MP is also there which will help you in getting the perfect selfie. 2GB RAM and 16 GB internal storage is there which can be expanded up to 256 GB after the insertion of the SD card. The display screen is of 6.2 inches with a resolution of 720×1520 pixels. The battery is powered with a rating of 4320 mAh, enough for you to go on for one and a half day without charging.

This phone is the newest version of the Galaxy J3 series with a five-inch display screen. This LED display has a pixel resolution of 720×1280, thus giving you an enhanced display quality and clearer image quality. The battery has an amazing capacity of 2600 mAh and hence charging it for a single time in a day will do the work. It has a 1.5 GHz quad-core processor from Spreadtrum. The internal memory is of the capacity of 16GB while the RAM has a capacity of 2 GB. The rear camera has the resolution of 8MP while the front camera has the resolution of 5 MP. It works on Android 5.1 operating system. The usual sensors are the proximity sensors, accelerometer, gyroscope, and an ambient light sensor.

With a 15.8 display screen, this phone is one of the best that you can have under 10000. The pixel resolution is around 720×1520 and thus, you will get a clearer picture with enhanced quality. The internal buildup has a quad-core processor with a clock frequency of 2 GHz. It also has a Cortex A53. The RAM has a memory of 2GB with the ROM having an internal capacity of 16 GB. This internal memory is expandable up to 256 GB. The rear camera has a pixel resolution of 13MP. The battery has the power capacity of 3260 mAh. The phone is loaded with different sensors including gyroscope, accelerometer, light and motion sensor, and so on.