Home Uncategorized PUBG vs Free Fire : which is better ?? 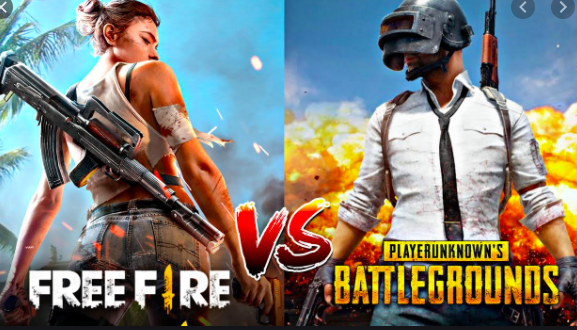 Firebombs, Headshots, TAC, Western, Smoke, Bullets, etc. you must be familiar with these words in the world of Battle Royale. These games have driven everyone crazy who just engross themselves in these battle games.

Whether it is a kid, a youngster or an adult, everyone enjoys this genre of game. These Role-playing games have gained immense popularity with so many options like PUBG, Garena Free Fire, Fortnite, Role Survival and many more.

Let’s check out the differences between the two and decide which one is better.

. The concept is the main thing!

Both the gaming options work on a similar concept. You can play solo or in a team in both PUBG and Free Fire. In both games, you are being dropped on a mysterious island, and all you have to do is combat the battle for your survival with the accessible resources.

. It’s all about the Graphics

Graphics play an important role in keeping gamers engaging. PUBG offers stunning graphics which has earned it the popularity it enjoys. Free Fire is not comparable in terms of graphics.

. All you need is proper storage.

As a gaming maniac, you need an enormous free space in your device to accommodate your favorite battle game. Since PUBG comes with a lot of graphics, it requires 2 GB of RAM and a minimum of 1.5 GB storage available to enjoy PUBG. On the other hand, Free Fire is a comparatively lighter game. It needs 1GB RAM and 500 MB storage in your gaming device. Keep your phones charged as both of these gaming options use up your battery very quickly.

In these battle Royale games, you have to play fearlessly to survive. Free Fire offers an exclusive option to become a unique hero having unique capabilities. Here, you can unlock your favourite character by winning the in-game currency. On the contrary, PUBG doesn’t have any of such distinctive feature. You are nobody and just have to fight to remain in the survival game.

. Weapons and vehicles are your real assets.

Battle games are nothing without marvellous weapons. For fighting any battle in the gaming world, you require certain  weapons and vehicles to keep going. PUBG gives you the option of possessing over 25 powerful weapons across several categories while Free Fire has only 18 weapons. There are so many choices available in PUBG that you continue enjoying your game tirelessly. Other equipment like first aid kits, energy drinks etc. are also available in PUBG.

PUBG has flair guns which are everyone’s much-loved, that is found after an extensive search. Even Free Fire has some astonishing collection of weapons like MP5, M500, Desert eagle, etc.

. Aim on your enemy

PUBG and Free Fire allow you to eliminate your enemy. Some excellent strategy skills are required to destroy your enemy and taste the victory. While playing PUBG, it feels more satisfying to kill your foe, thanks to its designers and features, which make you think you are living in the game. Playing Free Fire, on the other hand, gives a somewhat less sustaining experience in this regard.

. It needs to be compatible.

Your mobile device needs to be compatible to fight these survival games. PUBG is compatible with high-end devices with storage capacity to put up with it and its amazing graphics. For a fantastic gaming experience, you must have these sophisticated devices. However, Free Fire can be effortlessly accommodated in any low-end device with some bugs and unobstructed picture views.

.Your Gameplay and number of players

You have discovered yourself into an unknown island, and you have to battle to be the last player on the map. After landing on the map, you find weapons, loots, and vehicles to battle with other players associated with the game. In this regard, both games provide you with the similar Gameplay. However, there is a striking difference in the number of players: In PUBG 100 players can play and in Free Fire 50 players can compete with each other. So you have to defeat more players in PUBG to win the game.

As PUBG is a massive game for your PC or mobile device, it comes with a lot of irritating bugs such as car exit bugs, the door, lag etc. However, with each update, the developers are trying their best to fix all these related issues, but that introduces a new bug each time. In PUBG don’t be astonished if you get stuck somewhere in the sky on your helicopter or your motorbike rolls around unmanageably on the ground. While playing a Free Fire game, it has the advantage of having fewer bugs to be enjoyed on your low-end device. Both these online games hang up a lot.

It is a real struggle to choose the best among the two online video games. So if you have to select PUBG vs FREE FIRE for having an unforgettable gaming experience, consider the above points and then decide for yourself. The above aspects of difference will surely help you to make the best decision for your device and survival game. At last, it’s your preference.

Come, let’s get started. Fight on!

Too Dangerous: The Expert Calls For A Hard Speed Limit For E-Bikes